JCB’S popular Lakeside 5 road race returned with a bang last night with a bumper field – raising £2,000 for children’s charity the NSPCC for its work in Staffordshire.

In total more than 270 runners - including more than 50 JCB employees - signed up for either the 2.2-mile fun run or five-mile JCB Lakeside 5, which took place in picturesque countryside around JCB’s World Headquarters in Rocester, Staffordshire.

And a couple who met thanks to their love of running romped to victory in the race. Andrew Miles, 28, won the JCB Lakeside 5 in 26 minutes and 15 seconds. Shortly after, his partner Nia Nokes, 34, became the first lady to complete the five-mile course in a time of 33 minutes and five seconds.

The pair who live in Stafford, and both work for police forces in a civilian capacity, first got together after taking part in training runs. At the other end of the spectrum was John Hughes, of Derby, who at the age of 82 became the oldest-ever competitor in the race's history, completing the 5 mile course in one hour, seven minutes and 51 seconds.

I didn’t come with any expectations, so it is good feeling to come home first. It is also lovely to be supporting a local event like this. The course is quite challenging and at times is pretty steep, so it makes it ideal for runners to test themselves.

First lady Nia, who works for Staffordshire Police and runs for City of Stoke AC, said: “It makes it extra special that Andrew won, and I was the first female across the line. We got together because of running, so this is really nice.”

Also, on the starting line for the 37th annual running of the event, were two runners who have taken part in every race since it began. Stalwarts Charles Bevan, 76, of Abbots Bromley, one of the event’s founders, and Mick Grindey, 60, of Uttoxeter – both former JCB employees – took part in the first event in 1983.

The date of the race also marked Charles’ 76th birthday and he received a surprise birthday cake from former JCB colleagues as he limbered up for the start of the race. In fact, his birthday and the race even got a mention on national radio – on Ken Bruce’s BBC Radio 2 morning show.

Former JCB Group Electrical Engineer Charles who donned a Henry VIII outfit said: “It is just great to be back – and what a lovely way to spend my birthday. The surprise birthday cake was, well, the icing on the cake!”

Event Organiser Mick said: “We are delighted to be back with the JCB Lakeside 5 after a two-year break. This race has been going since 1983 and there are only three years when it hasn’t been held. Once when there an outbreak of foot and mouth and the last two years because of Covid. I would like to thank everyone who has participated and helped to raise so much money. But it would not happen at all without an army of JCB volunteers.”

A team of JCB apprentices and graduates supported the race as volunteer marshals. They included 20-year-old Erin Murphy, a second year Engineering Degree Apprentice. Erin, who lives in Uttoxeter, said: “This is my first experience of the event but there is a really great atmosphere. It is nice to volunteer for such a good cause – and I am definitely considering running in it next year.”

Another young employee was JCB Power Products Business Degree Apprentice Ioan Evans who battled back from a flu-like illness to take part in the race. The 20-year-old completed the course in 39 minutes and 47 seconds. Ioan, who lives in Tean and is originally from Lancashire, said: “Given I was recovering from illness, I thought a time of around 42 minutes would be good. So, to break the 40-minute mark is brilliant – I’m really pleased with that.”

Among the running clubs taking part were recently formed Silverdale Running Club, based in Newcastle-under-Lyme, staffs which sent a strong contingent. Club member Paula Anderson, 54, of Newcastle, said: “It’s nice to support the return of an event like this and it really helps to be running with such a strong contingent from the club.”

Normally an annual fixture, the event last took place in 2019 but then had to be put on ice because of Covid-19. 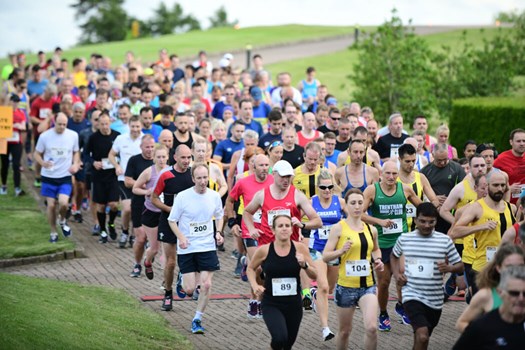 RUNNERS LIMBER UP FOR RETURN OF POP...