JCB’s Fastrac has stormed into the record books after being crowned the world’s fastest tractor with a speed of 135.191 mph.

The Fastrac - designed and built by a team of young engineers in Staffordshire - secured the title at Elvington Airfield in York with motorbike racer and lorry mechanic Guy Martin at the wheel. The feat was officially ratified by Guinness World Records who presented the company with a special framed certificate minutes after the achievement.

The astonishing story of the tractor’s development and assault on the record was told in a TV documentary on Channel 4 last night (Nov17) called ‘The World’s Fastest Tractor.’

The achievement comes after JCB set its first Guinness World Record for the fastest tractor at Elvington in June. Called Fastrac One, it reached a speed of 103.6 mph with Guy Martin in the driver’s seat.

JCB then embarked on an ambitious plan to break its own record and developed Fastrac Two – which was 10% lighter and was even more streamlined than its smaller brother.  Fastrac Two hit a peak speed of 153.771mph on its way to recording an average of 135.191mph at Elvington.

This has been a massive undertaking, and I was a very small cog in the machine. It was a proper privilege to be involved, so thank you very much to JCB and its engineering team, who got this tractor absolutely spot-on. Just look at it, they get stuff done, it’s brilliant, and it is still a working tractor, so could have gone straight into the nearest field to put in a shift.

A team of JCB engineers has been working on the project to further develop the tractor over the last few months and today JCB Chairman Lord Bamford praised their “amazing achievement.”

He said: “When we reached 103.6mph with the Fastrac in the summer, I was convinced we could go even faster, and the JCB team has risen to the challenge by setting this new record. It’s an amazing achievement delivered by a young and enthusiastic engineering team. Everyone involved should be very proud of the part they have played in showing off British engineering at its very best.”

The record-breaking attempt was overseen by Guinness World Records, who confirmed that the JCB Fastrac completed two runs, in either direction through a speed trap set 1km apart, within the allotted time, to set the 135.191mph record.

Getting Fastrac Two on to the Elvington aerodrome in just a matter of months has been a tall order, but one that the team of young engineers has grabbed with both hands.

JCB Chief Innovation and Growth Officer Tim Burnhope said: “Fastrac One really proved to us that there are no limits to what a young and dynamic engineering team can achieve. So we pushed boundaries and ideas, and looked at all aspects of the project to find solutions and make improvements. The biggest challenges have included aerodynamics, reducing weight and improving performance – getting a five-tonne tractor to safely reach 150mph, and stop again, is not an easy task, but we’re all so proud to have not only reached these goals, but to have exceeded them.”

Aiming for a target speed of 150mph and with the help of key industry partners, the JCB engineering team delivered a tractor capable of setting a new World record for the fastest tractor (modified), for which Guy Martin is undeniably proud to have been holding the steering wheel.

It was Lord Bamford’s idea to develop a tractor which had a high road speed capable of field work, and the World speed record now achieved came 28 years since the first production model rolled off the line.  JCB is no stranger to land speed records. In 2006, its Dieselmax streamliner set a new diesel land speed record when it reached 350.092mph on Bonneville Salt Flats in the USA, using two JCB Dieselmax engines. It’s a record that still stands to this day.

Not content with merely nudging up the previous 103.6mph record achieved using Fastrac One, the team drew upon all its knowledge and set about developing a more extreme machine that could put a clear line in the sand, when it came to tractor speed records.

Tim Burnhope said: “We used Fastrac One as a test-bed, which enabled us to move forward quite quickly and create a lighter, more streamlined tractor that could set an undisputed World record.”

Fastrac Two maintained the same design principles and packaging, but would be 10% lighter than its predecessor, reducing its weight to less than five tonnes. The tractor’s bonnet was changed from steel to aluminium; non-structural material was removed from the chassis, while the cab and roll cage mounts would be incorporated into the chassis design.

Streamlined bodywork also had a role to play, with aerodynamic analysis and development conducted by Rob Smedley, ex-Williams head of vehicle performance, and computational fluid dynamics (CFD) used by Williams Advanced Engineering, to give Fastrac Two a 10% reduction in drag over Fastrac One.

This saw the development of new cab air deflectors, a new rear cover, re-designed radiator covers, new side panels, front bumper and cab roof, would also help the tractor to cut through the air, on its way to the new Guinness World Record.

An extra shot of power was needed, and the 7.2 litre, 6-cylinder JCB Dieselmax engine produced at JCB Power Systems in Derbyshire, also received some extra attention. A new, larger turbocharger was accompanied by water injection and charge-air cooling through ice tanks, reduced intake temperatures by 50˚C.

An electrically driven supercharger system was again used, while a revised exhaust manifold contributed to improved flow. The adoption of a sophisticated anti-lag system would also keep the larger turbocharger delivering its maximum boost pressure while gear changes took place. The result of the powertain improvements was a peak output of 1,016hp at 3,150rpm, and over 2,500Nm of torque.

Despite the tractor developing 1,016hp, it achieved over 5mpg and needed only a tiny 20-litre fuel tank to make its high-speed runs. And while it has the capability to run on vegetable oil, a special formulation of high-performance racing diesel was used.

Fastrac Two’s driveline was also updated to cope. A multi-plate wet clutch was developed to improve torque management and create smoother gear changes for the six-speed manual transmission. An air-shifter reduces effort for the short-throw gear-lever, encouraging speedy shifts between ratios to encourage the Fastrac up to those record-breaking speeds. The tractor’s final drive capabilities were also improved.

Tim Burnhope said: “We still managed to use over 50% of standard Fastrac parts in the record-beating tractor, though tyres were an altogether different challenge. At 1.3m tall and weighing 80kg, and usually rated for 40mph, there was a lot of work to do to prevent them growing and heating up, from high-speed use. Modifications to BKT’s tyre design ensured high-speed capability, and repeated rig-testing would validate the Ridemax tyres’ capability at the much higher target speeds required for the World record attempt. The tyres were also equipped with sensors that also monitor heat and vibration in real-time.”

But the record-breaking Fastrac also needs to be stopped too, and given the 3,094m (10,151ft) Elvington runway, and the requirement to pass through a 1km speed trap to determine an average speed, the demands of braking also had to be met.

Tim Burnhope said: “The Fastrac’s advanced split-type air/hydraulic braking system was uprated with different brake pads and discs, but still using the tractor’s standard callipers. We also added a parachute on this version as an extra level of safety. Fortunately, we didn’t need to deploy it as all our engineering calculations meant that Guy Martin could comfortably stop the tractor from speed, after each run.” 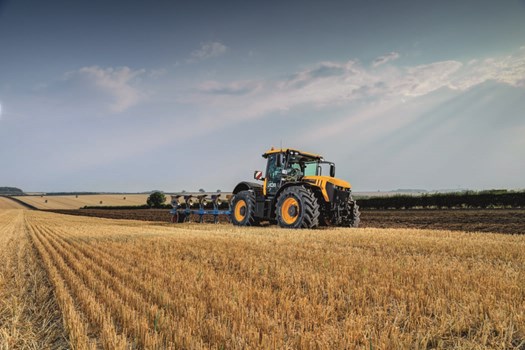